I am by nature a visual person, so plucking ideas from personal experiences and turning them into clothes is by far a much easier process than writing. As long as I am emotionally positive, I can envisage a garment – a seam here, a lining there, and pockets everywhere. Writing is a completely different process. I have to be mentally calm to string words together, no matter my emotional state. If anything, melancholy propels me. I am most prolific when immersed in gloomy solitude. A dark winter morning, a long transit in the airport, an empty cafe, a long walk home.

Melancholy is by no means a positive emotion. It is rooted in sadness and loss, sometimes a sense of longing for something that’s missing. Brian Eno and Ryuichi Sakamoto encapsulates this well, as with many other musicians like Bjork and Agnes Obel. In the world of cinema there’s Lars von Trier. When it comes to writing however, noone else comes close to Haruki Murakami. Kafka did well in depicting hopelessness, but it is not the same as subdued melancholy that Murakami is so accomplished in portraying through his mundane protagonists that are highly functioning in their day-to-day lives without much allusion to depression. One should not read his books for the plot, but for the pace, proses and analogies. In fairness I may not have read enough to discover other authors in the same vein. Perhaps I will get to the Russians one day and have my views changed on this subject.

Once when I was on a solitary plane ride, I came across a documentary about Mongolian nomads. Strong men and women riding horses graced the screen herding sheep and goats, while children as early as adolescent age helped their parents astride beasts much larger than their small bodies. They wore colourful clothes that showed little influence from the outside world. Vibrant fabrics donned bodies – some lithe, some sturdy – of these weather-beaten descendants of what used to be one of the most formidable armies in ancient history. Though the focus of the film was the lifestyle of the nomads, I was deeply captivated by the clothes they were wearing. Their typical clothing consist of an outerwear called ‘del’ or ‘deel’, paired with loose trousers. They carry the same signifiers as the Western suits and jeans – denoting seasons, occasions, genders and tribes through the use of different materials and colours – that is, normal everyday clothes for their way of life. I was so captivated by the imageries that they inspired ROSEN’s first collection in 2019.

As someone who is far removed from a nomadic lifestyle, I admit I am completely ignorant on what being a pastoral nomad is like. I’ve never even been to Mongolia. I wanted to learn more about the people whose clothing culture has broadened my perspective on colours and textures. Further research into my source of inspiration yielded a less than romantic picture of the land of eternal blue sky. The idyllic documentary hides the harsh living environments that these herders face. Beneath their stoic exterior lies the hardships presented by modern challenges, from global warming that is affecting their livestock survival, to severe air pollution.

Centuries ago, Mongolians had to worry about dying in wars or foreign invasions. Today, the post-Soviet country faces problems that were created within and outside of their control. Climate change has affected the livelihood of nomads. Shorter rainfall in summer means that less grass grows for grazing, and also less fodder to be stockpiled for winter. And then there’s the harsh winters that are unique to Mongolia, known locally as dzuds. 700,000 animals perished in the winter of 2018. These include sheep, goats, cows, and horses. For reference, a small lamb can feed about thirty hungry footballers. A loss that large led to the complete obliteration of the income of several hundred families, with no hopes of recovery to their old livelihood. 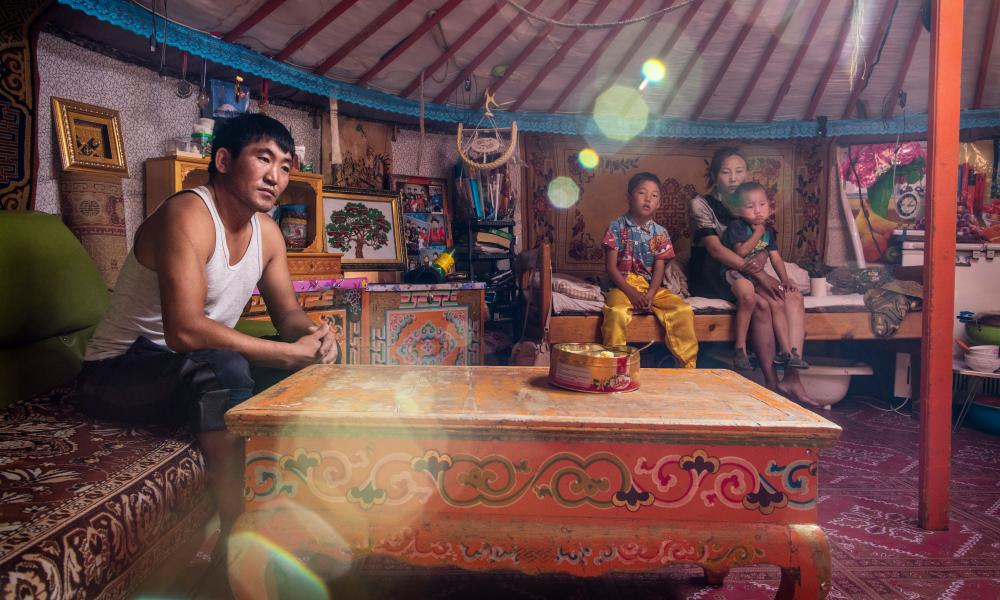 Altansukh’s milk pail stands empty. There is no horse for him to saddle. His cattle are dead. And this tent, which once stood in the countryside, is now on the fringes of the Mongolian capital, Ulaanbaatar, surrounded by pylons, rubble and the husks of old cars. Altansukh, his wife and their four children may live among rural paraphernalia, but following a disastrously cold winter a few years ago, they were forced to move to the city to survive […] “We lost all our animals,” the 38-year-old says. “Thirty-nine out of 40 cows, almost 300 sheep. The cows wandered far away in the snow and never came back. And when we got up one morning, all the sheep had frozen to death. We had lost everything – so we decided to leave immediately for Ulaanbaatar.”

Living in the capital city Ulaanbaatar provides access to basic convenience that we take for granted. City dwellers have access to running water and central heating. They don’t have to relieve themselves in the outhouse at minus forty degrees – a temperature so low there’s no need to discern between Celcius or Fahrenheit. Children can go to school. Public hospitals are within the vicinity. Yet for these newcomers, running away to the city presents new problems. When the country was run by a Communist government, immigration rate was kept under control so as to prevent overcrowding. But since the country has adopted democracy, such rules have been abolished. The city is now unable to cope with the large influx of rural migrants that had swelled the city three times the size of what it was planned for. Their addresses may have changed, but not their homes. Two thirds of the city’s population live in traditional makeshift gers with no central heating nor plumbing. Some complained of the stress of city life, from the complete and utter dependance on monetary system for basic necessities, to lack of space.

These temporal gers have no access to electrical heating system. In order to cope with winter in the coldest capital city in the world, they burn fuels in their indoor stoves. The richer ones burn coal and wood; the ones scraping by, tyres and plastic bottles. As a result, the city of Ulaanbaatar is now more polluted than Beijing in winter.

Lung cancer is now a common disease. Babies develop respiratory problems within months of being born. Despite the increased likeliness of developing cancer, many are enduring the air pollution for as long as it takes before their children graduate with a university degree, working menial jobs as janitors, dishwashers and illegal coal miners. While there are a minor subset who prefers the convenience of city life, many longed for the freedom and fresh air of the undulating grasslands, the comfort of solitude, the slowness of time. To say that Mongolians are a tough race is probably an understatement. Schopenhauer would have a field day seeing their determination to endure life-threatening conditions for the sake of continuing our lineage.

Beneath every picturesque image belies the struggles and hardships of life. The farmer worries for his animals; the metropolitan woman her crippling depression and anxieties. Life is all about deciding which cake to eat and mourning for the rest that we can’t have.

Building A Fashion Brand with A Purpose