Ever since I discovered the likes of Rick Owens and Comme des Garçons many years ago, I started developing an awareness of fashion that subverts gender binaries. I wrote an essay three years ago on this issue, arguing that androgyny is not simply men putting on skirts and women donning the suit to be manly. Having made unisex clothing for some time, I would like to revisit this topic with an additional technical perspective that I have gained in my trade, namely the visible differences between the male and female body, and ultimately presenting my argument that there is a negative correlation between androgynous fashion and sexuality.

As someone who participates as a consumer and producer in the global fashion industry, I am writing from the perspective of mainstream fashion that have proliferated in the 21st Century which is predominantly Anglo-American, due to a combination of centuries of colonialism and globalisation of cultural norms spearheaded by Hollywood and American media in the last fifty years.

What Androgyny Is Not

Many fashion articles that highlight androgynous clothing often put women in men’s clothing, such as in t-shirt and jeans or suitings, or anything that is oversized and boxy. I have argued that this was pseudo-androgyny because the clothes are simply moulding women to fit conventional masculine tropes. The same applies to men squeezing into leggings or mini skirts. Neither leggings nor a skirt is inherently feminine, but exhibiting the curves of the human body is closely linked to femininity, which I will address in the next section.

When fashion plays with narratives of gender, it would be more appropriate to call it gender bending. Gender bending fashion is an adoption of aesthetics of the opposite gender through manipulation of physical appearance in order to appear more masculine or feminine. A man may put on a pair of five-inch heels that create a conical shape down to the toe while pushing the derriere up and outwards, and a woman may put on a structured suit with full canvassing and power shoulders, which is deeply entrenched in masculine signifiers. Contrary to making them look androgynous, this fashion approach further highlights the differences in gender norms.

True androgyny lies in the absence of gender binaries and its associations. Designers that have managed to create androgynous clothing are typically the ones who erase masculine and feminine physical differences. Bonus point if they can converge feminine and masculine design language in a single garment. Often this is done by taking cues from non-Western aesthetics that are more nuanced and less obsessed with the explicit expressions of sexuality.

Any rule-breaking endeavour requires an understanding of said rules. In order to deconstruct gender codes in clothing, we must first look into the physical differences between men and women and how clothing caters to those differences, as well as the sexual connotations between male and female dress that is deeply tied in our biological imperative to attract a mate and procreate.

1. Human Physique and Differences in Gender

Before we can create a gender neutral silhouette, it is important to understand the typical differences between male and female anatomy. The primary differences lie in the relationship of shoulder width to waist and hips, and where the waistline lies on the body.

In general, the widest part of the male and female body is the shoulders and hips respectively. Of course this can all be modified to a certain degree depending on any intensive physical activities or excess fat deposits that a body undergoes. A competitive female swimmer with broad shoulders have a similar body shape as an average male, while an overweight male may develop larger breasts, hips and thighs that are akin to a female body on the larger side. 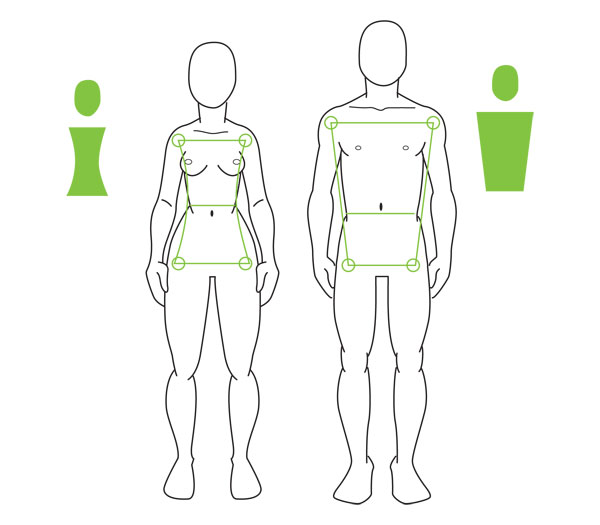 A comparison between typical male and female physique

Men and women's waistlines fall at a different place relative to the entire body. The waistline on the female body is higher than that of a male, which means that for two people of the same height, a woman's upper torso will be shorter than a man's. This is also the reason why women are more 'leggy' than men. In terms of clothing construction, jackets tend to be shorter for women than it is for men of the same height. Trousers for women also have a higher rise in order to accommodate the longer central torso from the crotch to the natural waist area.

2. Sexuality Signifiers in Men and Women and How They are Translated through Clothing

It is hard to ignore the role that sex plays in fashion. Being perceived as sexually attractive is often the primary goal of dressing, regardless of the gender of the target audience. Popular culture is the perfect reflection of current aesthetics norms especially today in our influencers and celebrities-obsessed society. Clothing that is considered sexual by mainstream standards tend to exaggerate physiological differences and gender roles between men and women. It may be 2019 but we have not really learnt to uncouple our sexual preferences from our biological imperatives. The more we highlight our gender differences, the easier it is to advertise ourselves as a biologically viable mate. This behaviour is often carried out on a subconscious level due to the implicit gender norms and societal pressure that everyone grows up with, even if we don't wish to procreate or have the desire to mate with a member of the opposite sex.

Much of menswear is still hung up on clothes that are structured, protective, and armour-like. Menswear suitings remain a symbol of power and responsibility since the Industrial Revolution; it sculpts the body to give the appearance of strong upper torso and lean legs; outerwear takes its cues from military uniforms, be it the trench coat or bomber jacket. Male dress is tied with the masculine role of being the protective figure and head of the household, harking back to the days when men had to die in battles and steal women from the next village.

Women’s femininity on the other hand is deeply entrenched in fertility and vulnerability; fertility as a mother, vulnerable as a member of what used to be the weaker sex. Throughout history, women depicted as mother figures or symbols of beauty were either naked and voluptuous, or swathed in long flowy robes. Within the circle of European high society, the Georgians loved an exposed neck and breasts, the Victorians tiny waist and comically large behind. French Rococo dresses were so wide at the hips that women had to go through entrances sideways. Italian Renaissance loved a round soft stomach. Despite the ebb and flow of fashion throughout centuries, female dress places emphasis on the curves of the body. These bodily curves - where fat deposits tend to occur on women - are biological markers of fertility; they provide visual cues indicating that a woman has enough body fat to sustain life within her and continue to nurse a newborn after birth. There has never been a time when females with broad shoulder and strong muscular back is associated with femininity, even when many of them had to till the farms and perform hard labour. 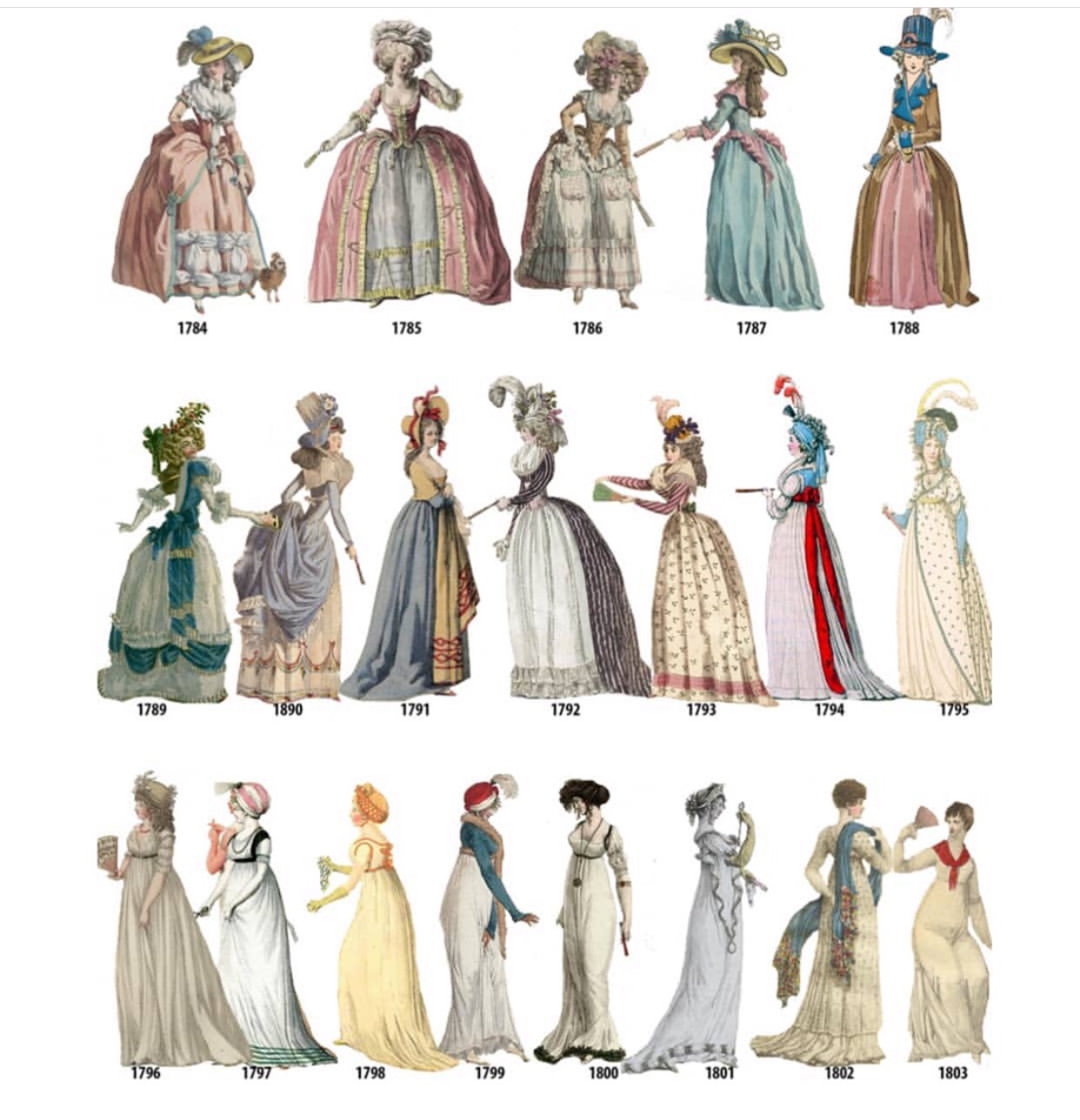 Gender norms of the past continue to form the basis of masculinity and femininity in aesthetics today, which in turn influences clothing construction. Masculine Western clothing relies on tailoring to create structure, while feminine clothing often use draping which creates a soft and flowy silhouette. However, it is important to note that today’s designers are relying on spandex in womenswear as the demand for tight-fitting garments increase. Despite covering the body, tight-fitting clothing continue to strengthen conventional feminine tropes in fashion as it aims to highlight the curves of the body more than providing substantial protection. 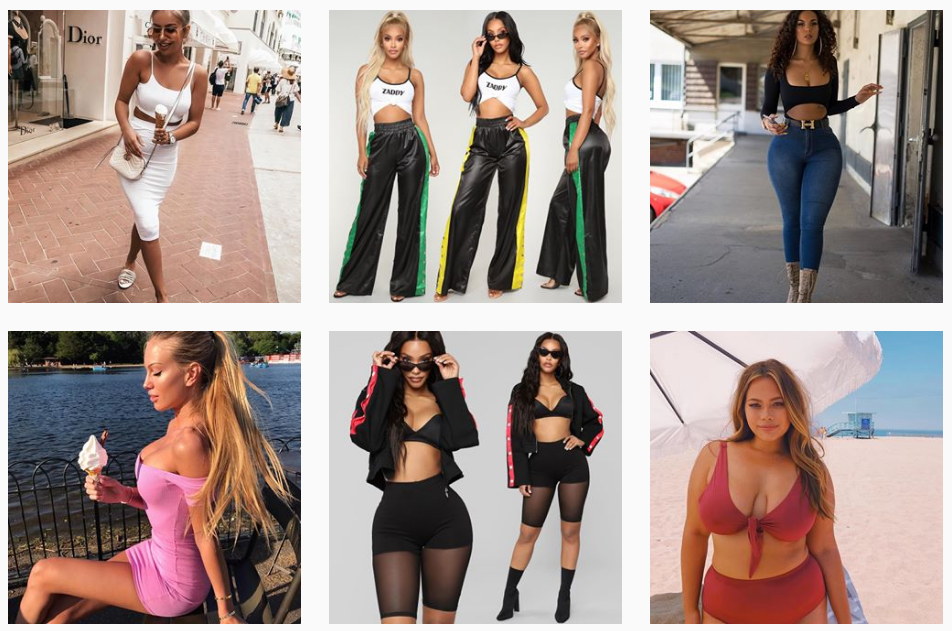 The search for gender neutral clothing is not as simple as men putting on women’s oversized parka, nor women putting on men’s trousers. This is especially difficult when it comes to structured clothing with plenty of seam lines that can fall at the wrong places. Male regular rise trousers are closer to women's low rise, and also made with smaller waist to hips ratio. Women’s jackets are cut with narrower shoulders and shorter sleeves. It also ignores the nuances of clothing construction that can be overly rigid, or overly drapey. The instances of men and women being able to swap pieces in which they don’t look oversized or wearing other people’s clothes are uncommon, especially when it comes to tailored clothing.

Genuine androgynous take on fashion distorts and sculpts physical proportions of the human body - either through structure, draping or both - to create a gender neutral or exaggerated non-human silhouette. There is more emphasis on concealing the shape of the human body or adding space around the body. Non-Western dress such as Japanese hanten, Middle Eastern kandora and Mongolian deel are some examples.

Rigidity and fluidity in garments are important aspects of design in manipulating silhouettes to create an androgynous look. Rigidity constricts the body to diminish curves, and fluidity softens its hard edges. A poncho is the perfect example of an androgynous garment because it combines both the rigidity of the protective fabric with how the garment drapes gently over the body. Issey Miyake comes to mind as a designer that consistently played with exaggerated, non-human silhouettes. He used the kimono as a starting point of his design to make clothing that creates space around the body, in contrast with Western aesthetics that contours the body to an idealised shape. By bringing Japanese sensibilities to the runway, he had inspired young designers to look at fashion aesthetics from a non-sexualised point of view. More examples of designers' works that play with gender neutral silhouettes can be found here

Androgyny Exists in A Spectrum

Androgynous fashion is not black and white. On its most basic level, it is the kind of clothing that can be worn by any gender, but it is not necessarily absent of gendered codes. Tilda Swinton is the perfect example of someone who consistently plays with androgynous fashion. On the left, her outfit feels more feminine because the waistline is visibly much higher on the torso while her body is wrapped in soft, flowy drapes of fabrics. On the right, what could be construed as androgyny on the surface actually has a more masculine slant due to the strong shoulders. As we go towards the center, she appears more gender neutral in clothes that combine both rigidity and drape. It downplays her feminine figure without accentuating any signifiers of masculinity. Like the two examples in the middle, true androgyny is rigorously austere and absent of ornamentation. Rigid androgyny is reminiscent of robots, while fluid androgyny is ascetic, much like monks and priests.

Considering that I am writing this topic in 2019, it is interesting to note that there seems to be more examples of menswear designers experimenting in gender neutral silhouettes. Judging from the demographics of my customers, it seems that the group more likely to wear androgynous clothing is men. Womenswear was going through the same movement, spearheaded by Phoebe Philo's Céline in the early noughties when she made minimalist androgyny appealing to women. Clothes were loose and comfortable. Women felt less pressured to show off their bodies. But that has now taken a backseat as more women are increasingly embracing their femininity through overt sexualised dressing.

It is possible that menswear is just catching up with what women have been experimenting with in the last twenty years. But as micro-trends evolve faster than ever, it will be difficult to ascertain where we are headed next.


One thought on “Androgyny and Elimination of Gender Codes in Fashion”